What's this spot in my pictures?

Ever had a spot like this in your pictures?

This is not regular flare that you often get when you have a bright spot, like the sun, in the frame or just outside the frame. Regular flare is typically a series of reddish rings, aligned on a line that goes through the light source and the center of the lens. For example, it looks like this: 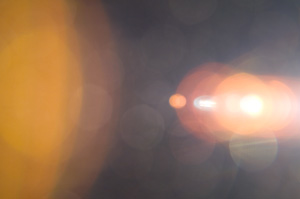 The other type of flare is strictly only in the center of the frame, it's only one circle, and it does not need a bright light source in the frame.

Well, here's the solution. This kind of flare is caused by light that first goes through the lens, falls onto the image sensor, some of it is reflected back, and some of that is again reflected back from the rear lens element and falls onto the sensor a second time. There are three major factors contributing to this effect:

The effect is most easily discovered when there's generally a lot of light in the image, but there is a dark object in the center of the frame, providing a contrasty background to the spot.

This effect is also the reason why many third-party lens makers updated their lineup when DSLRs entered the mainstream. These lenses were mainly unchanged except for the coating of the rear element. And of course it can't hurt sales to have "digital optimized" written on the box...

Most original Minolta lenses do not exhibit this problem, because the coatings were already quite good before DSLRs appeared. Still, there are a few exceptions:

If you want to test your lens, take an image of a white piece of paper in bright light, with a dark, matte object in the center (e.g. a lens cap). If you're lucky (or unlucky) a greenish round spot will appear in the center. The smaller the aperture, the smaller and denser the spot. Please let me know of your results!